County Garage Ltd was selling Ford, Standard, Triumph and Ferguson before the second world war. After WW2 Ford was taken to court by Ferguson who accused them of stealing his patented 3 point linkage tractor invention. Ferguson won his legal action and decided not to share it with Ford. After this date there were to be no dealerships with both Ford and the Ferguson connected Standard Triumph cars.

County Motors (Carlisle) Limited (company number 00439912) was incorporated as a company on 30 July 1947. County Motors came into being in 1948 selling Standard, Triumph and Alvis cars as well as Ferguson tractors.
The car retailer hit its peak in the 1970s, when its showrooms in Rosehill and Botchergate sported offerings from brands such as Jaguar, Daimler, Triumph, Rover and Land Rover. In more recent times it also acted as distributor for Fiat, Daihatsu and Alfa Romeo. Since 2009, however, County Motors dealt only in selling and repairing used cars.


At its peak the business employed over 140 people at several sites. The failure of the Rover Group in 2005 was a big blow to the business.  February 2006 saw the sale of the Penrith branch. 24 July 2013 saw the appointment of an administrator to the business.  With the closure of the showroom and workshop at 78 Kingstown Broadway, Kingstown Industrial Estate, Carlisle, Cumbria CA3 0HA eight employees working at the dealership, among them the owner and sole director Barry Tweddle lost their jobs and the business was closed down. The business had been an MOT testing station..


Death of Mr I H Dixon

The death of Mr I H Dickson, founder & Managing  Direcector of County Motors (Carlisle) Ltd, was reported in the Standard Car Review October 1953. One of the early pioneers of the motor industry. Henry Dickson held one of the earliest  distributorships of Standard products. 62 years of age. he was naturally very well-known throughout the motor industry.

After the first world war he gained considerable respect as a successful competitor in motor cycle trials and later as a racing motorist. Mr Henry Dickson had a wide circle of friends among the farming community of Cumberland and was especially interested in mechanized farming, being closely associated with Harry Ferguson Ltd. His main personal interests were shooting and fishing. He left a widow and an only son, Mr Bob Dickson.

Atlas in the Lake District 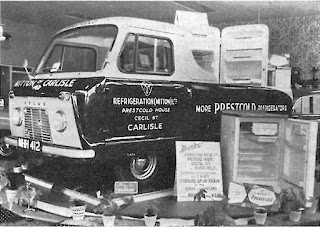 Early 1960 saw an Atlas Pick-up on display in the showrooms of County Motors (Carlisle) Ltd, Carlisle. The display vehicle regularly covered the Lake District with an average load of 15-18 cwts. Refrigeration (Mitton) Ltd, Carlisle had two Atlas vehicles and four 6 cwt vans, out of a total of nine Standard vehicles in their fleet.

Standard Triumph factory staff visited between 10th and 14th April 1967 to assist the Botchergate branch with a special promotional Show and Service Week.

If you have any more information or recollections about County Motors (Carlisle) Ltd or any other Carlisle area Standard Triumph garages such as photos of window stickers, dealer badges or sill plates etc please let me know. I can be contacted via the comments to this post or on facebook at https://www.facebook.com/stephen.weblin

Galileo on the Triumph Dolomite forum has very kindly scanned and made available a 1974'ish copy of the Triumph Sales And Service directory.   You can get a copy here: https://drive.google.com/open?id=0B6QR7c9loufLQXJsTkJWUTEtelk