The 31st article in my series about Standard Triumph is a little different. Rather than being about the dealers who sold the cars in this post I will introduce the subject of getting the cars to the dealers. 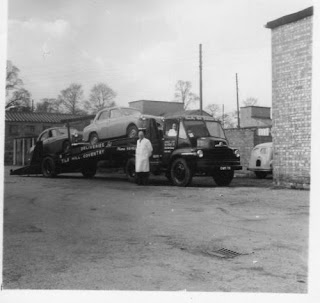 Canley Car Deliveries - getting cars away from the factory to the Standard Triumph dealers. 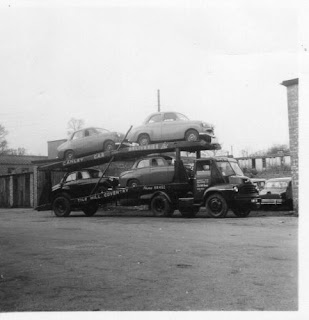 "Canley Cars first started trading as a company on 21 November 1945. Very small at the time it operated from a lock up garage in Kirby Rd Earlsdon. Expanding it moved to the old hostels in Duggins Lane in the early 50's, then to Burton Green, and again to behind C and E Motors (now Homebase). You can still see the original gates to Canley Cars in Canley Rd opposite the gun shop. In 1964 the company was sold on by its original owners." as originally posted 31 January 2017 by SteveR on the Historic Coventry Forum.

Many  distributors picked up cars from the factory using their own delivery vehicles. I have several photos of trucks operated by dealers that I will include in the next installment of this article.

If you have any more information or recollections about any of the Standard Triumph car delivery lorries please get in touch. I would like to see any photos you may have. I can be contacted via the comments to this post or on facebook at: https://www.facebook.com/stephen.weblin