An old advert said to date from sometime between 1928 to 1935 according to njam52 from whose collection it appeared on the Southport.GB.com forum. 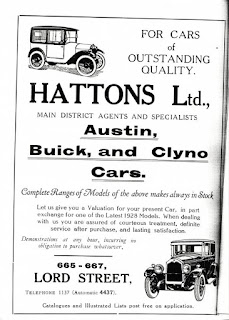 They did have the garage at the corner of Hartwood Road and, Roe Lane. I understand they ran the first licensed taxi's in Southport, "White Tops" They were allowed eight licenses. Pre-war The cars were Morris Eights. Black bodies with cream tops.

If you have any more information or recollections about Hattons (St Helens) Limited please get in touch. I would like to see any photos you may have. I can be contacted via the comments to this post or on facebook at: https://www.facebook.com/stephen.weblin

Picture credits: Hattons on the corner of Leicester Street and Lord Street appeared in The Southport Vistor; An old advert said to date from sometime between 1928 to 1935 from the collection of njam52;
Posted by vitessesteve at Thursday, March 23, 2017