In this article H H Timberlake Limited of Wigan are the feature business. Starting out in 1891 with bicycles, in 1902 the firm started dealing with De Dion, Humber and Minerva cars. The first car sold was a Humber 2 1/4. As time passed the number of sales increased and the company acquired more showroom space.

By 1937 H H Timberlake had 3 car showrooms with space for about 250 cars.  In addition they had  another showroom big enough for 100 motorbikes.  Employing over 50 men, the firm also had workshops and parking.
The 12tht to 16th December 1960 saw a week long Show and Service Week promotion by the firm at their Library Street, Wigan premises assisted by staff from Standard Triumph HQ.

Mr Timberlake was a very active businessman involved in many different firms.  He acted as a director of several motor car related companies elsewhere in England. 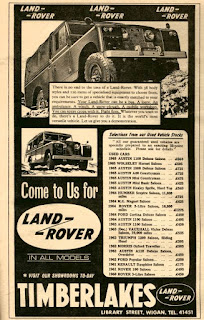 Timberlakes sold Land Rovers.  This advertisment is from a Wigan local newspaper and dates from 1966.

An old H H Timberlake shop front was revealed when a successor business on the site ceased trading and the premises were made available to let.

I have extracted this information from my collection of Triumph car dealer directories.  Did the Wigan area really not have an Austin Rover dealer in 1988 or 1991?

If you have any more information or recollections about H H Timberlake Limited of Wigan please get in touch. I would like to see any photos you may have. I can be contacted via the comments to this post or on facebook at: https://www.facebook.com/stephen.weblin