Number 34 in my series of articles about Triumph car dealers this is article about Mumfords who had garages in Plymouth, Truro, Exeter, Newton Abbot, Tiverton and Torquay.

Mumfords had a long and varied history.  Starting out in Plymouth in 1900 as William Mumford Limited the firm grew in size and spread to other towns. Established a motor and carriage building business. Turnover in the first year was reported as £500 and within 4 years it had expanded to £2500. I have already written about the Motor Macs (Exeter) Limited business that was taken over. 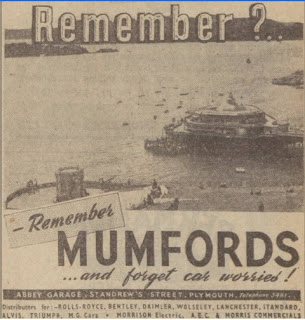 This advert from 1946 for Mumfords of Plymouth was placed in the Western Morning News.  At that time the firm were based at Abbey Garage, St Andrews Street and held franchases for many brands of car including Rolls Royce, Bentley, Alvis, Daimler, Wolseley, Lanchester, MG, Standard and Triumph. At this time they were also dealing with AEC and Morris commercial vehicles.

The 28th November to 2nd December 1960 saw a week long  Show and Service Week promotion by the firm at their Abbey Garage premises assisted by staff from Standard Triumph HQ.

As an alternative to the predictable father Christmas theme Mumfords window display looked forward to summer 1960.

From Standard Triumph Review July 1966 -  Showroom window display arranged by Standard-Triumph dealers, W Mumford Ltd, of Plymouth, when Sir Donald Stokes, Chairman of the Company, visited them. During the display the gunmetal and wedgwood Herald 12/50 was kept wet by a fine spray of water, and the sun above the open "summer" car was illuminated. A most impressive display, as Sir Donald himself remarked.

In 1973, Mumfords had Crayford develop a Marina convertible. They paid all the development costs in exchange for manufacturing rights and the sole franchise to market the car. You can see more pictures and read more about this car on the Crayford Convertible Car Club website.

Not all the branches of the Mumfords empire dealt in Standard Triumph products. However as a matter of interest I will list them in this section information I have come across in my collection.
From Service in Europe 08/74:
Mumfords of Truro (W Mumford Ltd), Newquay Road - Austin, Morris and MG.
Mumfords of Newton Abbot (W Mumford Ltd), 48-56 Wolborough Street - Morris I think this business later became a branch of Wadham Stringer.

I believe Mumfords of Newton Abbot was established following the take over of A C Bulpin & Son Ltd who had been a Standard Triumph garage in 1955. I am not sure of the date of the take over.

Mumfords as a Triumph car dealer

Mumfords, Newquay Road, Truro were a distributor for Triumph and other British Leyland vehicles. The S regs in the above advert would indicate 1976 to 1977 registration year. Unfortunately I have a big gap in my directory collection between May 1975 and March 1988 so can not be sure over what period Mumfords held the franchise.
In March 1972 and March 1974 Mumfords (Exeter) Limited, Paris Street are listed as distributor for Triumph.

In May 1975 Mumfords (Exeter) Limited, Paris Street are listed as distributor for Triumph, Rover and LandRover products with Mumfords of Tiverton Ltd, Blundells Road, EX16 4BZ as a dealer of the same range.

If you have any more information or recollections about  any of the Mumfords businesses including Mumfords (Exeter) Limited please get in touch. I would like to see any photos you may have. I can be contacted via the comments to this post or on facebook at: https://www.facebook.com/stephen.weblin