S H Newsome & Co Ltd of Coventry are the feature business in this article.


The S H Newsome Corporation Street, Coventry showroom can be seen in the background to this photo from 1965. The showroom was a large glass fronted building with showrooms over two floors. 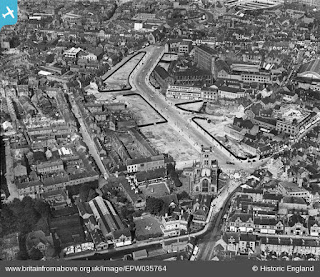 Corporation Street, St John the Baptist's Church and environs, Coventry, 1931 from the air with the S H Newsome building facing an empty plot.

Samuel Herbert Newsome known as Sammy Newsome was born 1901 in Coventry the son of Samuel Theo Newsome (1868-1930), a watch manufacturer, and his wife Kate.  He was educated at Oundle School, Peterborough before serving an apprenticeship at Calthorpe Motor Co.

The S H Newsome & Co was established 1923 and built the Warwick car.  Later he moved into the theatrical business. The Coventry Hippodrome was renamed the Coventry Theatre during his time as owner and manager.

I am indebted to Grace's Guide for much of the information in this biographical section.

During 1938 S.H. "Sammy" Newsome at the time a successful SS Jaguar Distributor who had been very successfully campaigning an SS 100 in Rallies & Hill climbs asked William Lyons to build a deluxe version of the popular SS 100 sports car.

Lyons reportedly told Newsome he already had too many different models to build.  Newsome contracted with the factory for 50 bare SS 100 chassis to build his idea for a deluxe SS 100 DHC with roll up windows & a wider body. Early in 1939 he has Avon Coach builders of Coventry build 2 prototypes.

I am indebted to http://www.strever.com/avon/ from where I found this information in this section about the SS100 DHC.


It was reported in the Standard Triumph Review of November 1967: Bobby Gould, Coventry City centre forward takes delivery of a Triumph Spitfire 3 from Mr. D. Harty of S. H. Newsome and Co. Ltd., Coventry Distributors of Triumph cars. The Spitfire was· in Wedgwood blue - very appropriate for a 'Sky Blues' player.

Said to be the first of many petrol injection TR5's on order by police forces throughout the country is shown here being handed over by Mr. Paul Newsome of S. H. Newsome Ltd., Triumph Distributors,
Coventry, to the former Traffic Superintendent of Coventry City Police, Mr. Tom Norton sometime in 1969. The car was used on the A45. 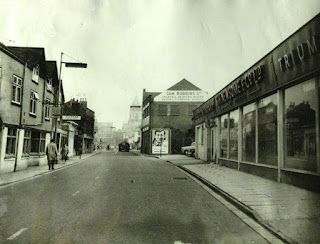 S H Newsome had a branch on Lawford Road Rugby.

Staff from Standard Triumph HQ visited the business and assisted the firm with week long Show and Service promotions.  These were held by the firm at their Corporation Street premises on 27th June to 1st July 1960 and at their Kenpas Highway premises on 23rd until 27th November 1964.

If you have any more information or recollections about S H Newsome & Co Ltd of Coventry photos of window stickers, dealer badges or sill plates etc please let me know. I can be contacted via the comments to this post or on facebook at https://www.facebook.com/stephen.weblin